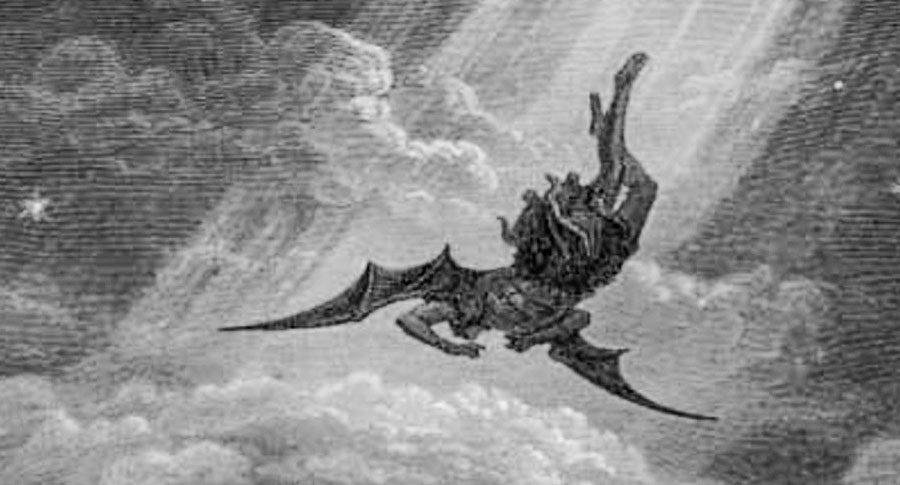 “…I beheld Satan as lightning fall from heaven.”

They say the greatest trick the devil ever played was convincing people he doesn’t exist. But this is not new. We see the battle between good and evil demonstrated in popular entertainment. Could this story about the cosmic battle between Satan and God be just that, an epic story?

The following is taken from http://www.everystudent.com/wires/devil.html

In cartoons and comics, the devil appears as a cute, benign tempter, pushing you to do something that’s fun or a little bit wrong. In reality however, Satan is anything but cute.

Who is the devil?

He is not God’s counterpart, because God has no equal, no opposite. God has always existed, and everything else that exists now, including angels, were created by God.

The devil (sometimes referred to as Satan or Lucifer) is an angel who rebelled against God. He is the enemy not only of God, but also of humankind, relentless in his mission: to kill, destroy, or enslave us. We’re warned, “…be watchful. Your adversary the devil prowls around like a roaring lion, seeking someone to devour.”

The devil’s power is laughable compared to the power of God. Yet, he is a real threat to humans, and has the capacity to ruin a person’s life.

Satan has one primary tactic: to deceive us. He seeks to deceive entire nations, the world, and individuals. He twists and distorts what is true, and there is power in his lies.

Dr. Neil Anderson made an astute observation. He said the Bible describes Satan in three ways:
– The tempter
– The accuser
– The father of lies

In what ways does the devil lie?

Here are just a few examples.

God created Adam and Eve with free will to choose and make decisions, just like humans can today. The Garden of Eden contained perhaps hundreds of fruit-bearing trees. The only instruction God gave to Adam and Eve was to not eat from one particular tree. It was a straightforward instruction to follow. Just don’t eat from that one tree or you will die. Simple enough.

Satan deceived Eve, convincing her that God was withholding something wonderful from them, that this fruit would make them like God. And wouldn’t that be a good thing? The problem was, it wasn’t true. Adam and Eve believed Satan’s lie, rather than what God told them, leading to horrible consequences. That’s exactly how the devil operates. He distorts the truth in order to harm the person.

How the Devil Accuses God

Satan’s greatest desire is to keep people far away from God. He will seek to either cause you to deny God’s existence or to slander, lie about God’s character. Here’s an example.

God repeatedly affirms his love for us. “I have loved you with an everlasting love, therefore I have continued my faithfulness to you.” “…not that we loved God, but that he loved us…” “See what kind of love the Father has given to us…” “For God so loved the world that he gave his only Son, that whoever believes in him should not perish, but have eternal life.”

But what does Satan say? “God doesn’t love you. Look at all the problems you have. If God loved you, you wouldn’t have these problems.” Sounds convincing.

Yet all people face problems. It’s part of life. What Satan neglects to tell you is that if you have a relationship with God and depend on him, God can lead you through those problems. You do not need to shoulder or solve them on your own. God can give you wisdom and real strength in the midst of those problems. Not only that, but he says while we face difficulties, “…my peace I give to you…”7 Why? Because the person knows that God can be trusted.

Without God, a person is described as “without hope in this world.” That is not God’s desire for anyone.

How the Devil Accuses You

Not only does Satan try to deceive you about God’s goodness, but Satan also slanders you to God. Satan did this with a man named Job. Satan said if Job suffered, then Job would curse God to his face, which Job never did. Satan seeks to undermine you and condemn you before God.

But not only that. Satan turns his slander and condemnation toward you.

He convinces you, “God wouldn’t want you. You could never be holy enough. Look at all the junk in your life, all the ways you’ve failed, the things you do, the addictions you have. God would never accept you or want you. You’d never make it.”

Again, all lies. God is very clear that none of us need to become “good” in order to be accepted by God, nor to become sinless in order to maintain that relationship with God.

Jesus said of Satan, “He was a murderer from the beginning…there is no truth in him. When he lies, he speaks out of his own character, for he is a liar and the father of lies.”

The contrast between the devil and God is stunning. Jesus said, “The thief comes only to steal and kill and destroy. I came that they may have life and have it abundantly.”

Jesus says of those who believe in him, “If you abide in my word…you will know the truth, and the truth will set you free.”

Instead of being deceived by Satan, there is an opportunity to know what God says is true about himself, about your life, about relationships. While Satan would like you to be enslaved by his deception, God wants you to know what’s true, to be free and experience real life.

In addition to being a liar and an accuser, Satan, through his lies, tempts people toward slavery and addictions. “Oh go ahead. One more won’t hurt you. No one will find out. You’re not really hurting anyone. And you’ll feel so much better.”

How to Deal with Satan

If you decide to begin a relationship with God, you will still be tempted by Satan. You still have free will, making whatever decision you’d like to make. However, in many situations you would also know what’s true and be less likely to give in to Satan’s lies, less likely to feel helpless, confused or fearful. Further, God offers his help.

We’re told, “The temptations in your life are no different from what others experience. And God is faithful. He will not allow the temptation to be more than you can stand. When you are tempted, he will show you a way out so that you can endure.”

Who is Satan? A tempter, slanderer, and liar. His intent is to keep people isolated from God, so they will listen only to Satan, joining in his rebellion and experiencing destruction. Nothing he says about God or your life is true.

God desires a relationship with you and for you to experience his love. He created you not to live in darkness, confusion, but to know what’s true. Jesus said, “I am the light of the world. Whoever follows me will not walk in darkness, but will have the light of life.